The purpose of this page is to document my personal observations and methods of quickly finding the South Celestial Pole (SCP) for the polar alignment of an equatorial mount, which hopefully will be of benefit to others who find it a difficult or time consuming task.

Traditional methods of finding the SCP  include the following: 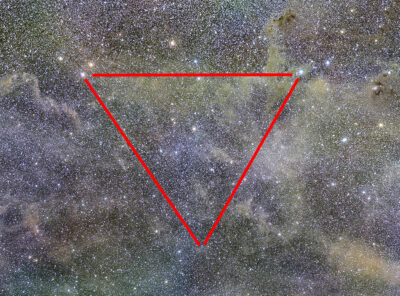 In 2015 I designed and built my first equatorial mount out of Meccano, utilising a second DSLR as the polar finder-scope. I would take a series of exposures and gradually zoom in and adjust the mount until the SCP was in the middle of the camera’s LCD. I wasn’t happy with any of the standard methods of finding the SCP so set to work using planetarium software and any photos I could find of the region around the SCP to find my own methods using patterns of stars, two methods of which which I present here.

Firstly I would like to clear up some confusion that exists about what “Octans” really is.  Personally I struggled with the differences for a long time.

The yellow lines show what is often referred to as the Octans Trapezium which appears frequently in many SCP finding tutorials and other SCP related texts. Only in very dark skies with well adjusted night vision are they generally visible to the naked eye – I can see  them with dark adjusted eyes in the early morning  from my semi-rural SQM 21.4 backyard.

It is the red lines we are interested in as they make up the Octans shape in the polarscope reticle. They are the only 4 stars I will show after this.

The image below shows the constellation artwork from the stellarium-web.org website overlayed onto my image to show the location and sizes of the constellations and the star locations that I refer to below. 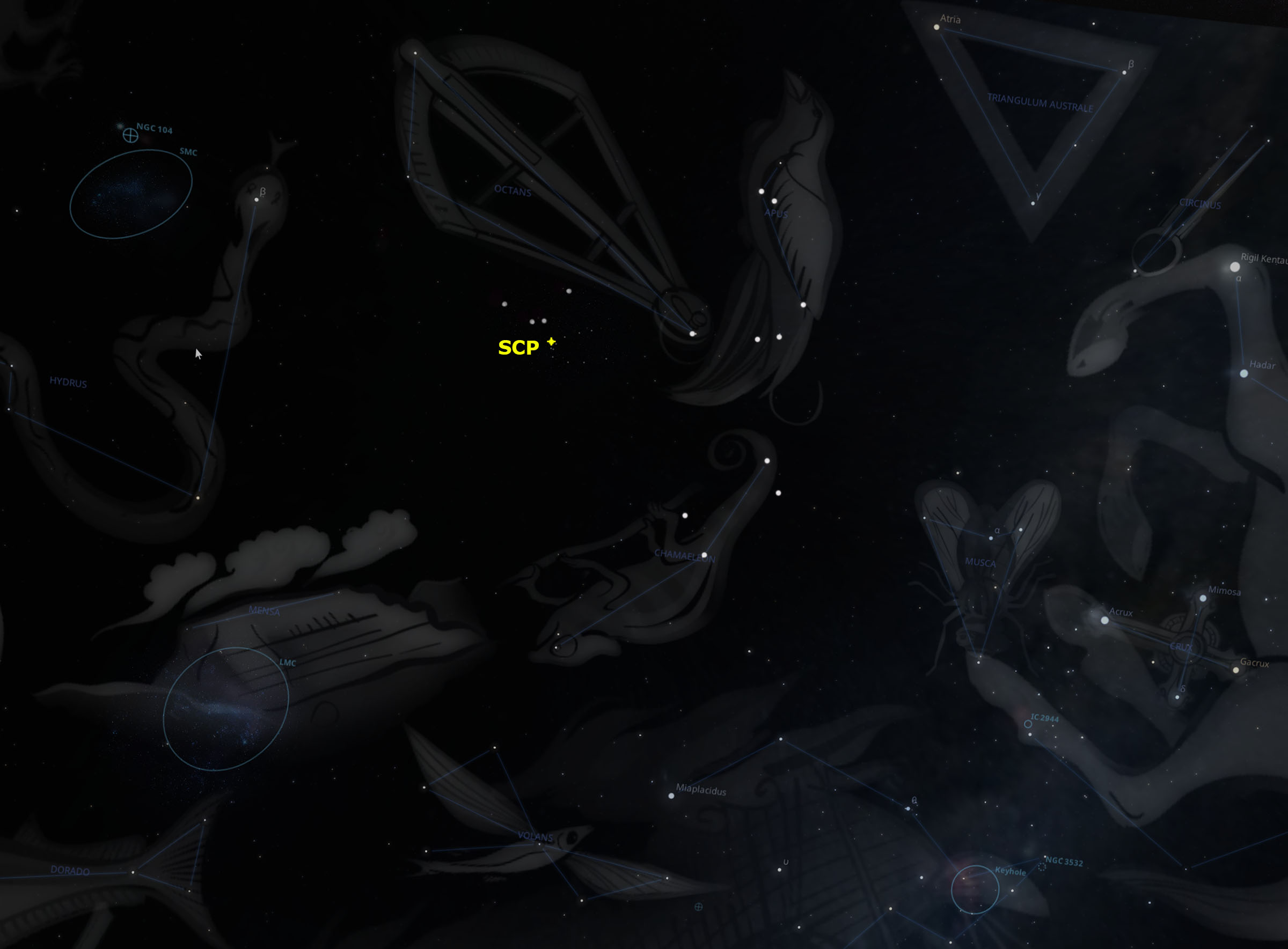 The primary aim, and from what I can ascertain the biggest problem especially those new to polar alignment, is to find the four very faint stars that make up the Octans alignment shape found in many polar-scope reticles.

In my research I  noticed that there are two rather distinctive patterns of stars that are part of the Apus and Chameleon constellations – one being in a semi-circular pattern and one being rectangular. Ranging from magnitudes 3.8 to about 5, I have estimated that these should be visible from a Bortle 5 red light-pollution zone. 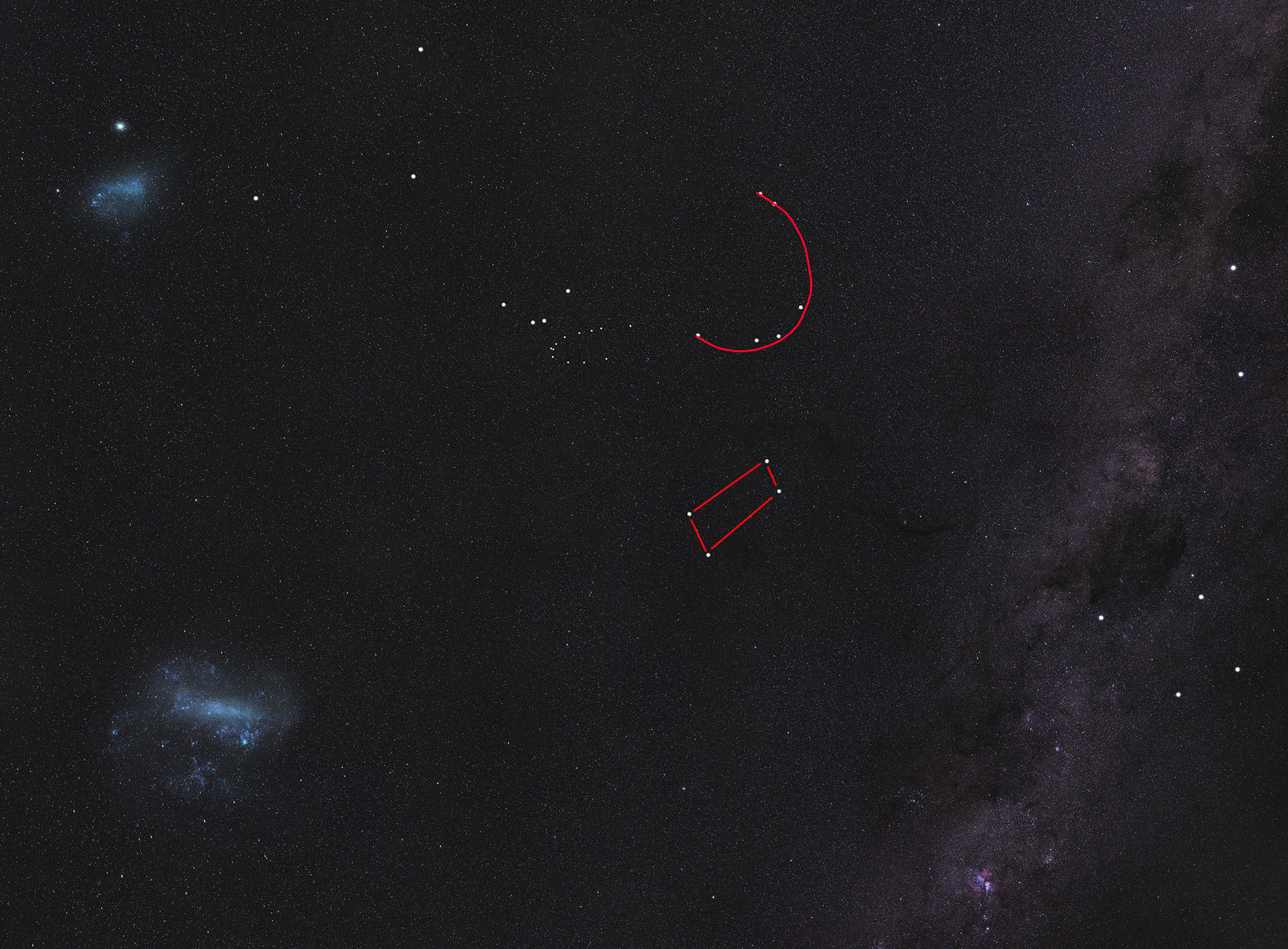 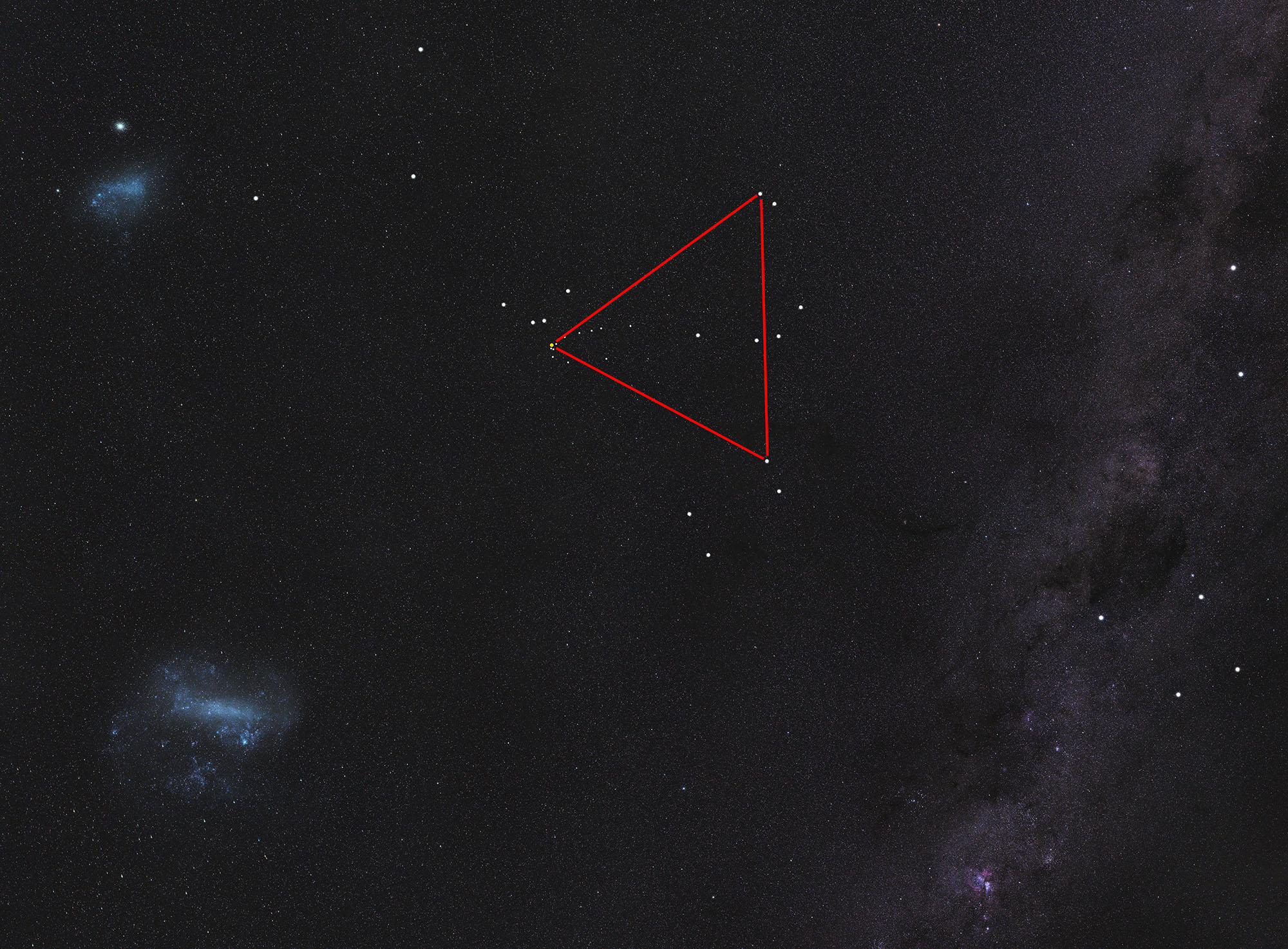 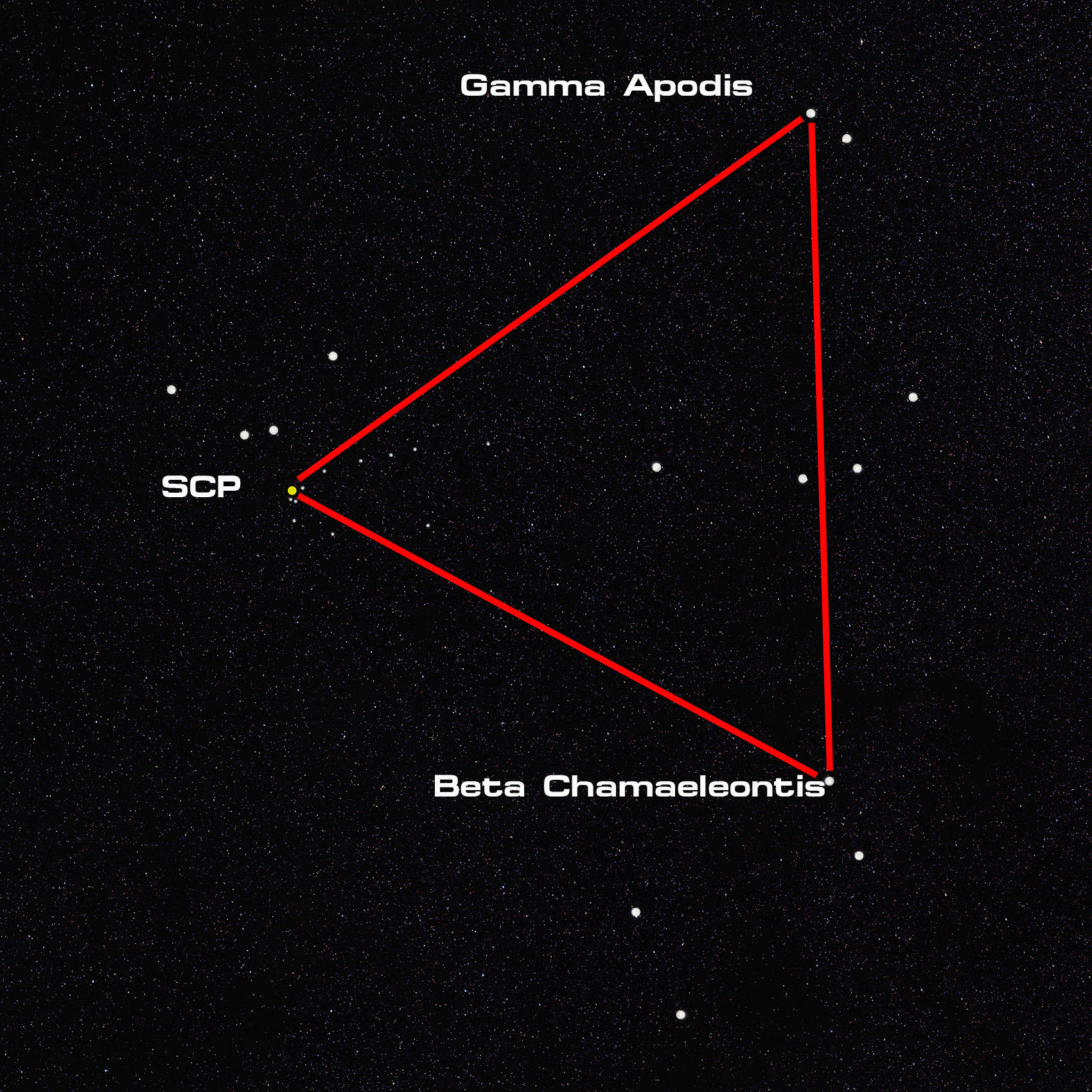 My main technique for quickly finding the location of the Octans stars is to  use my outstretched fingers at arms length (which match the apparent distance between the two stars) – where they join is a very close approximation and a good starting point to initially aim my mount’s polar-scope.  Provided my tracking mount is level and its elevation correct I can usually find the Octans stars in the polar-finder and be accurately polar aligned within 1 to 2 minutes.

I have also tried cutting out a cardboard triangle with equal length sides and used that as a template at arms length, (with one side being the same length as the apparent distance between Beta Chamaeleontis and Gamma Apodis) – but reverted to using my fingers which is quite adequate.

Before starting on an imaging session I have a quick look on the Stellarium Planetarium software to see the current location and orientation of the reference stars.  But be aware that the image will be inverted when looking through a polarscope which can be confusing.

An alternate technique for finding the Octans asterism for polarscope alignment involves estimating the halfway distance between Beta Chamaeleontis and Beta Hydrae, the head of the snake.

Beta Hydrae is a bright star close to the Small Magellanic Cloud and forms a distinctive triangle with Sigma and Nu Octanis as shown below.

The Yellow Circle is approximately the view you get through a polarscope so this method also gets you well in the ball-park to find the 4 Octans stars to aid with your polar alignment. 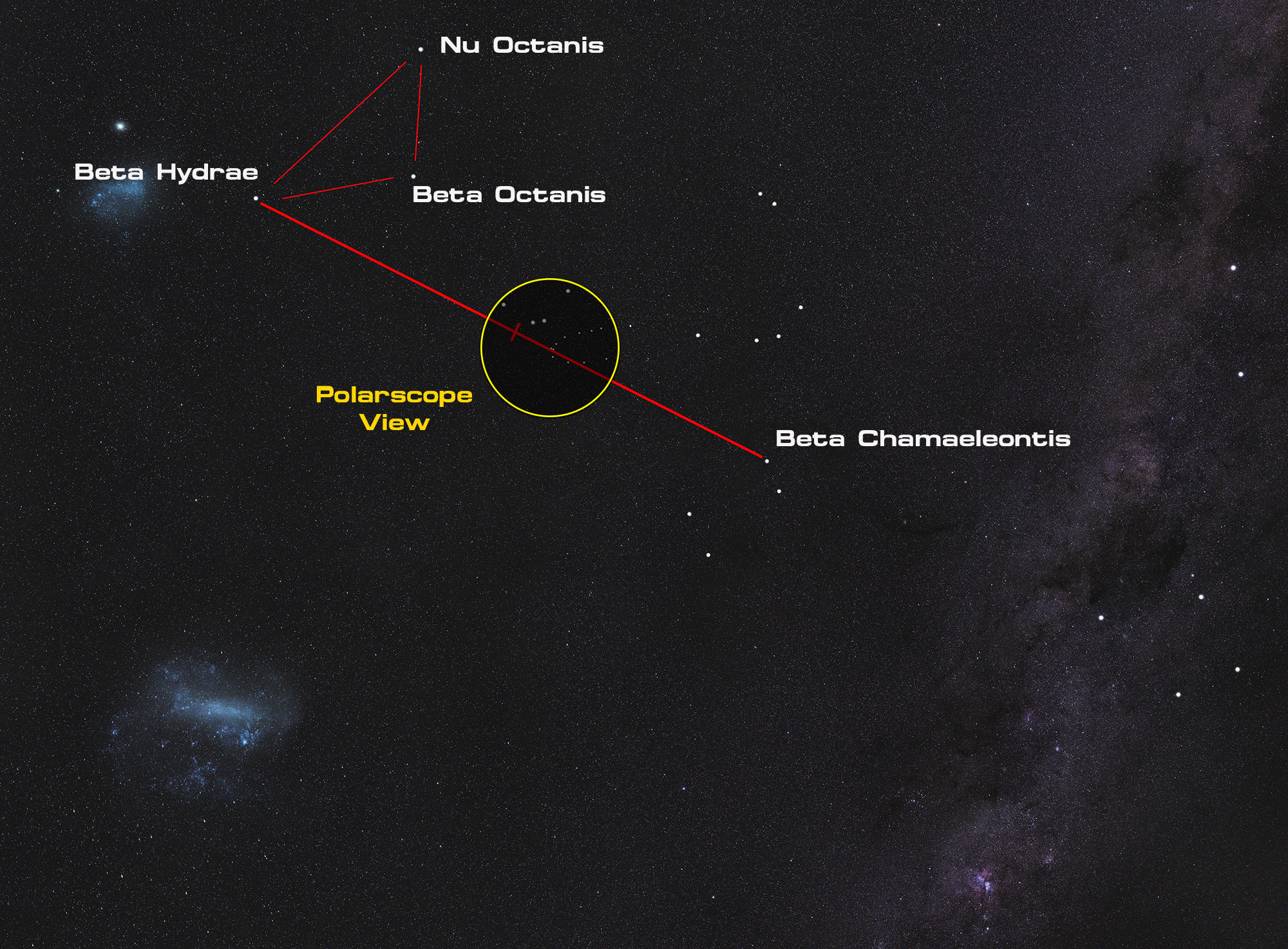 Once you have have the Octans asterism in your polarscope view, you need to get the reticle centered near the trio of  “true” southern polar stars.  They are near the tip of a distinctive loop of magnitude 8 to 9 stars, the brightest of which can be made out by eye in the finderscope with good dark-adjusted vision and moderately dark skies (I can see BQ Octans and HD99685 clearly  at the tip of the loop under my SQM 21.4 sky)

Note that due to a phenomenon known as “precession of the equinoxes” the SCP moves about 50 arc-seconds every year (about the apparent width of Jupiter).  This is significant if you refer to ten year old SCP finding maps that will show the SCP as being significantly away from its current position.  Atmospheric refraction can also apparently affect the apparent location of the SCP.  Exactly how much and what can be done about it ?  I have no idea. 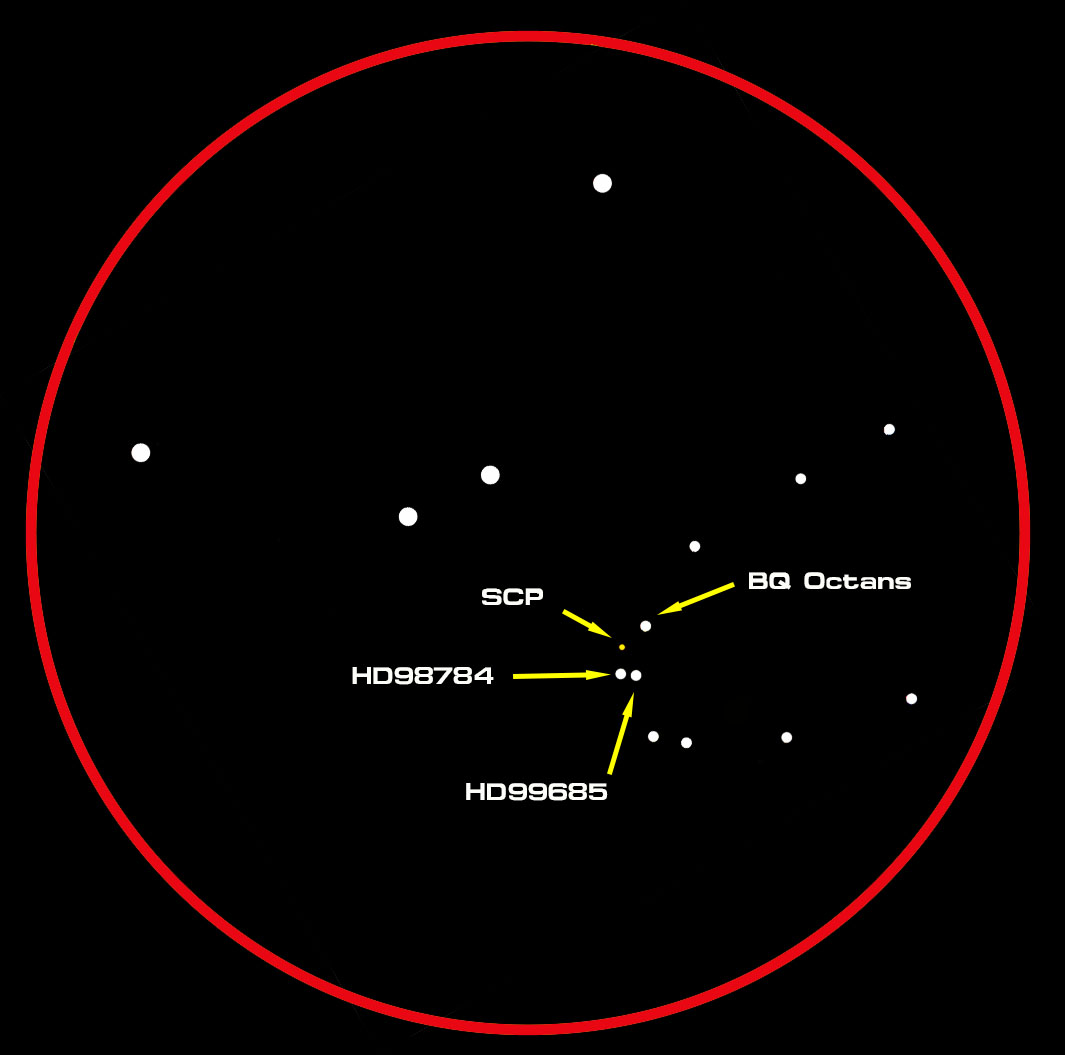 This is a zoomed view through my Star Adventurer’s polarscope.  Note that there are two VERY small stars even closer to the SCP.  (I can’t find a designation or name for them anywhere)

Here is a configuration I sometimes use if I cant make out the tiny stars adjacent to the SCP  (e.g. strong moonlight, light polluted skies, eyes not dark adjusting e.g. at a Star Party) – a Canon 70D (with a handy hinged LCD display) coupled to a 50mm F1.8 lens, high ISO and 5 second exposures.  The camera’s LCD becomes a polarscope viewing aid.   I find this essential for very long exposures with the Star Adventurer  (e.g. 5 min plus at 700mm focal length) and confirming polar alignment as an imaging session progresses (and my eyes may not be dark adjusted for whatever reason).   The above polarscope image is taken in this manner.   (Note instead of the DSLR peering into the polarscope I am now experimenting with a ZWO ASI290MM mini camera and CS-style zoom security camera lens)

Well I hope this page has been of some benefit to anyone reading it. I’ve deliberately make the background dark in case the reader wishes to use it as a reference in the field.

One final piece of advice I can give is to  practice finding the stars and constellations I refer to above on your own or other people’s Nightscape images (including my own in the Nightscapes gallery of this website).    I always found it fun to see how quickly I could locate the Octans stars and the SCP in such images.    The Stellarium mobile and desktop  applications and stellarium-web.org website are also an excellent way to practice finding the  key constellations and stars and you can always turn on the equatorial grid as a “cheat” to find the SCP.

But in my opinion nothing beats sitting out under the stars on a clear night, letting your eyes dark-adjust  and trying to find them, even if you aren’t doing an imaging session.